Last Sunday I decided to take my friend's children to a Family Fun event at the Morris Museum of Art. Every first and third Sunday the Morris offers something special for the entire family to enjoy, and offers other fun events on particular Saturdays.  Last Sunday was Artrageous! Family Sunday: The Creative Extravaganza. It began at 2 p.m. when magician and storyteller Chad Crews took children and adults alike on an adventure about reading, dancing, animals, reading, art and of course, magic. He informed the audience that he learned to do magic by reading, and that they can learn how to do cool things too just by visiting their library, checking out a book they are interested in and reading it, either by themselves or with a parent. 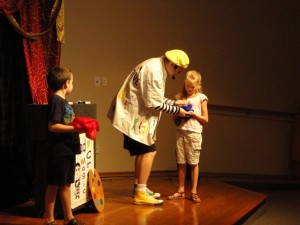 Throughout the magic show Mr. Crews would tell the crowd that "Good readers can learn to do all types of things, meet all types of people and go on all types of adventures." By the end of the show I think every child had this memorized. A large part of his show was about his snakes, Buttercup and Cornbread, which fascinated the younger audience, especially my friend's four and five-year-old. Their eyes were transfixed every time the snakes were part of a magic trick. Some children were a little frightened until Mr. Crews explained that not all snakes are aggressive and that they can learn more about snakes by reading about them. After the magic show the children were taken into the art room and given pictures of snakes, a canvas, paint and brushes and told to create their own version of the pictures. Because the children were of all different ages and art levels the pictures varied. There were some very detailed snakes and other "abstract" finger-painted snakes, but in the end everyone had a great time, especially my friend's children who are already counting down the days until the next event, which is on November 7th and will feature a puppet show and more art time afterwards! 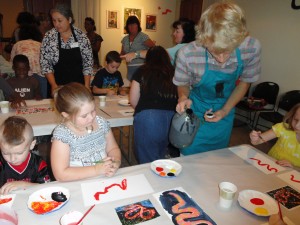